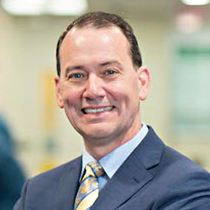 ASHP has named Scott J. Knoer, Pharm.D., M.S., FASHP, as the recipient of the 2019 John W. Webb Lecture Award. Knoer is the Chief Pharmacy Officer at the Cleveland Clinic where he leads an international pharmacy enterprise with a $1.1 billion drug budget and 1,410 FTEs in 18 hospitals with facilities in Ohio, Florida, Nevada; Toronto, Ontario, Canada; London, England; and Abu Dhabi, UAE.

A passionate advocate for patients and the profession of pharmacy, Knoer has successfully lobbied the Ohio and Minnesota boards of pharmacy to allow the advancement of pharmacy practice and was instrumental in state and federal initiatives to reduce the impact of drug shortages. In 2017 he was a co-recipient of the ASHP Board of Directors’ Award of Excellence for his work raising awareness of drug price increases among policymakers and the public.

Knoer is often quoted as a healthcare expert on a broad array of topics in newspaper, radio and television outlets such as the Wall Street Journal, the Washington Post, the New York Times, the Boston Globe, NPR Radio, CNBC and many others. He has published editorials in Time, Newsweek, STAT First Opinion and The Hill. He has published extensively on a wide variety of pharmacy and leadership topics and is a frequent presenter to state, national and international audiences in the United States, Canada, United Arab Emirates, Saudi Arabia, Italy, China and Japan.